While on a Bike Tour Across the Red Desert 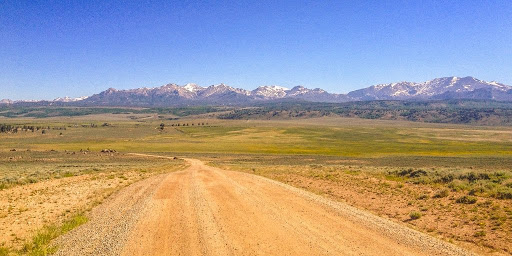 Late in the afternoon on a warm June day, I took off from Atlantic City heading south along the Great Divide mountain bike route across Wyoming’s Red Desert. I was riding through a particular area known as the Great Divide Basin, or “The Basin” for short.  No water flows out of this area and so the continental divide splits and is drawn around this dry expanse.

Bike riders and Continental Divide Trail hikers speak of this area with trepidation.  The Basin holds a reputation for high wind and very little water. Many of these long-distance adventurers are intimidated by the Basin, but during my own journey from Canada to Mexico on my bike, I found it to be one of the biggest highlights.

Since it was a warm June afternoon and I still had 90 miles of riding before I reached Wamsutter, I left the Atlantic City Grubsteak loaded down with supplies.  I was trying to move fast and light but I also wasn’t about to head into the desert without ample food and water to get me to the other side.

There was wind, but luckily this time it was at my back.  With a full belly from the Grubsteak and a freshly tuned bicycle from Gannett Peak Sports, I rode into the desert with nervous excitement.  The desert was immediately vastly different than my last two weeks of riding in the mountains. It seemed as though I could see for a hundred miles in every direction.  My perception of distance was not calibrated for this landscape. To the north, the mighty Wind River Range shrank in the distance with every mile I rode. Every other direction looked like a sea of sage, sandy rocky hills, and sky.  Predominately the sky. I felt very small under this, the largest sky I have ever seen.

After crossing the Sweetwater River, the sun began to sink low over my right shoulder but the air was warm and I had no desire to slow down.  After years of completing long-distance trips, I’ve begun to realize how dawn and dusk are my very favorite parts of the day. There is a peaceful calm and warm light that accentuates the sights around you.

This particular evening I was rewarded with one of the most memorable and spectacular sunsets of my life. The reds, yellows, greens, and browns of the desert became so vibrant, it was almost as if they were emitting their own light.

The Honeycomb Buttes in the distance were now glowing bright auburn red. The pain in my legs from two straight weeks of 100+ mile days was completely gone—they were pushing harder than ever. I wanted to see more of this magical different land.

As the night sky began to overtake the fading light to the west, the stars came out in force.  The night was crystal clear and the view just looking up could make you question if it was real.  With no mountains to block the view, it was purely stars from horizon to horizon, an unbelievable sight.  I rode late into the night. I was energized by the excitement of being in such a beautiful place all alone and far away from everywhere. Finally by 1 a.m. I decided I should get a few hours of rest before getting an early start to beat the heat tomorrow morning. On top of a small knoll by the side of the rough two-track road, I pulled out my bivy and fell immediately asleep.

Sometime later, I was frightfully awoken to an intensely huge light coming over the hill straight at me.  I quickly stirred and checked to make sure I was far enough from the road to not get run over before I realized it was the moon rising.  The moon was full and absolutely massive! The entire desert was illuminated in this incredible mysterious hue where I could see everything around me yet it was still the middle of the night.  I sat up for a while just to admire the view. As if this night couldn’t have gotten any more beautiful, it had pulled its trump card.

Dawn came early and so I packed my bags to make it to Wamsutter before the heat of the day.  The morning riding was pleasant as I saw a few small streams and an old abandoned cabin from a time long ago.  A small group of wild horses crested a ridge not more than 50 yards from me. They noticed me but continued running without a care in the world.  Such an amazing place.

Around mid-morning, the heat and the wind began to turn their screws on me.  A while later, the route turned onto a road that was sandy, severely washboarded, and not much fun as a cyclist.  I stopped for a bit, drank some water, had a snack, and decided to check the map. I was less than five miles from town!

I thought to myself about how my crossing of the Basin was perfectly timed and my experience so different from the foreboding tales I’d heard from other travelers.  After 2,750 miles of riding dirt roads and trails between Canada and Mexico along the Continental Divide, through mountain ranges and wide-open expanses, my time in Wyoming’s Red Desert stood out as an incredible highlight and one I’ll never forget.