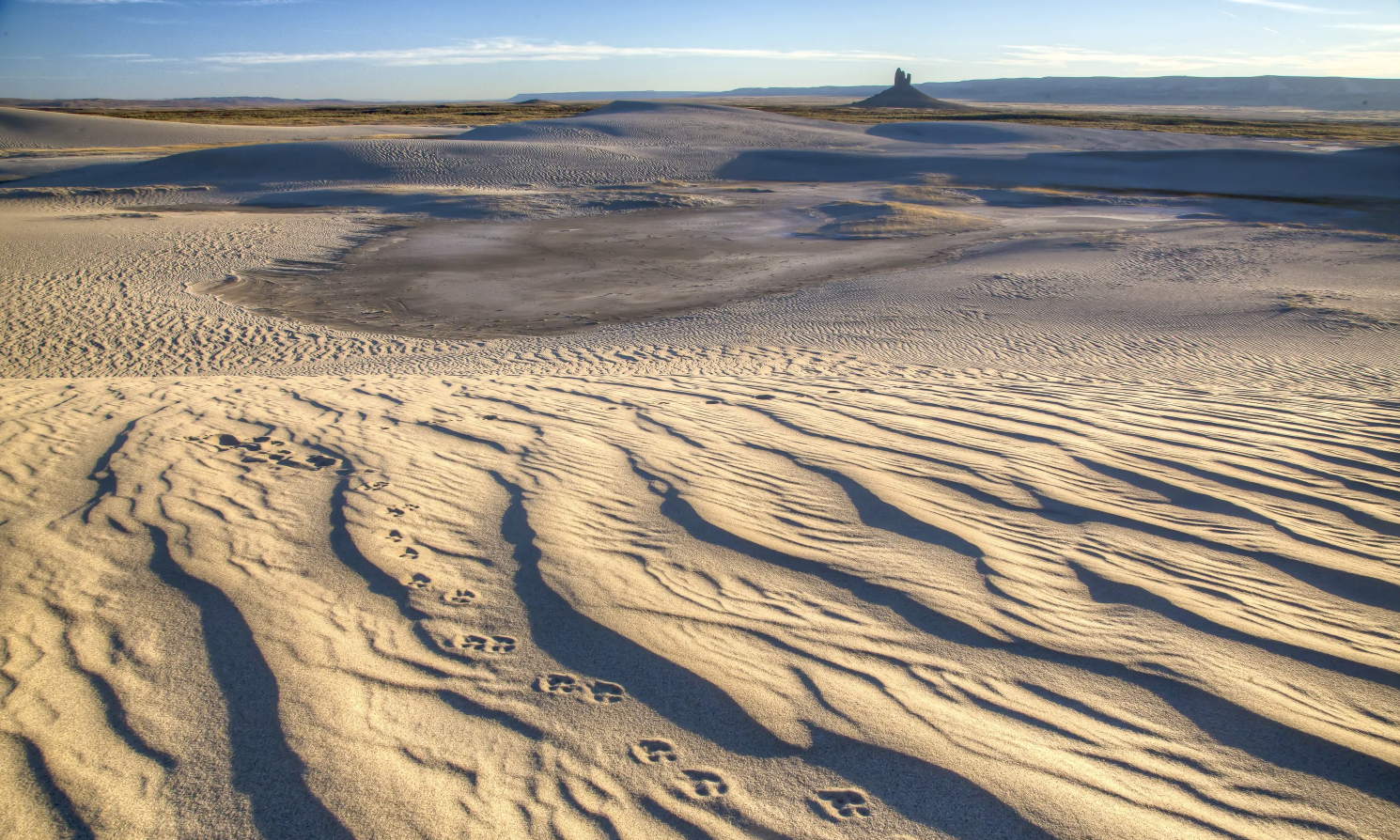 Published in the WyoFile by Katie Klingsporn

But due to a lack of signage, scant online information and no widely available detailed map, recreating in the enormous swath of land has long been a daunting prospect for many.

“We do have a lot of customers who come in and ask about the Red Desert,” said Liz Ferguson, manager of the Farson Mercantile — an ice-cream shop and popular travel stop located on the northwestern edge of the Red Desert. “The majority of them are confused about where it’s at and what they are going to see.”

That common confusion — coupled with a growing curiosity — prompted the Wyoming Outdoor Council to design a new resource aimed at demystifying the Northern Red Desert for outdoor recreationists.

The map, which is expected to go into print in March, throws a once-fuzzy area of BLM lands into relief. It highlights geologic formations and historic landmarks, lists mileage, offers factoids, delineates migration corridors and plots out hiking trails. It also urges visitors to be prepared to travel in a place with spotty cell-phone connection, dicey roads, rough conditions and few, if any services.

“We want to have [the map] increase the awareness both that it’s out there, and make sure folks are safe and understand how to use it,” WOC’s Director of Engagement Mike Kusiak said.

The map isn’t the only new development regarding the Red Desert. The BLM’s Rock Springs Field Office is expected to release long-awaited revisions to its Resource Management Plan this spring — which could open up more of the Red Desert to energy leasing. With potential changes coming down the pike, Kusiek said, it’s an opportune time to help people to get to know, and love, the Red Desert.

In its entirety, the Red Desert stretches across a vast swath of southwestern Wyoming and beyond — from the ghost town of South Pass City up north it spills south, east and west, past the Utah and Colorado borders. A wildly varying landscape unfolds across it, aspen-fringed mountains giving way to otherworldly badlands, stark sand dunes pouring into endless sagebrush seas.

This image of Honeycomb Buttes is featured in a new map of the Red Desert. (Wyoming Outdoor Council)

Though its precise boundaries vary depending on who you talk to, many tout the roughly 6-million-acre patchwork of federal, state and private lands as America’s largest unfenced area. It includes the Great Divide Basin, a depression out of which no water flows, requiring geographers to split the Continental Divide around it.

WOC narrowed in on a roughly 3-million-acre segment known as the northern Red Desert for its map. That quadrant is home to a concentration of significant historic sites, Native American art and geologic marvels, along with 10 federally designated Wilderness Study Areas.

The map guides users through a “driving tour” that winds down county roads into the heart of the desert. It features stops at landmarks like White Mountain Petroglyphs, which contain hundreds of figures etched into sandstone; Killpecker Sand Dunes, one of the largest sand dune complexes in the country; and Honeycomb Buttes, an area of once-underwater sediments shaped by time into otherworldly hoodoos and spires banded in purples and yellows.

It also points users to significant historic landmarks — European American emigrants followed the Oregon and Mormon trails through the Red Desert, using formations like the twin mesas of the Oregon Buttes as guideposts. It denotes trails like the Continental Divide, labels campsites and lists the Farson Merc with an ice-cream-cone icon.

“For those that know the area, it’s been highly valued by Wyoming people for frankly more than a century,” she said. “It’s been a keystone place in our state.”

But for those newly curious about the place, a paucity of good information makes it hard to approach, she said.

“I think the motivation has been a long-term interest we’ve had in educating the Wyoming public about the values of the Red Desert,” Kessler said.

WOC has conducted many public tours of the Red Desert over the years, she said, and attendees are reliably impressed. “It seemed like a map was a good way to just reach more people.”

What kind of people? Kusiek said that varies, from “the person who likes to drive OHVs through the sand to folks who want to see petroglyphs and have quiet spaces, to hunters, birders, to those seeking digital detox.”

Regardless of their pursuit, if they are venturing into the Red Desert, they are heading into a place where a spiderweb of dirt roads, few signs and nearly no cell phone service create certain hazards. Communicating those realities was another of the map’s goals.

“We warn people to bring a spare tire and extra food and water,” Kessler said. “It’s not for the faint-hearted. But we wanted to make it more accessible.”

As WOC pieced together its map, another process with implications on the future of the Red Desert was unfolding.

The Bureau of Land Management’s Rock Springs Field Office is nearly finished with a years-long process of revising its Resource Management Plan. The RMP revision, a technical and broad-reaching document, will steer the management of some 3.5 million acres the office oversees — much of it in the northern Red Desert.

The office’s most recent RMP was signed in 1997. The current rewrite began nine years ago in 2011. The process has entailed years of inventories, public outreach and stakeholder meetings to get a sense of everything from critical habitat to recreation potential and energy interest, said Rock Springs Field Manager Kimberlee Foster.

“It’s a real comprehensive look over the entire field office, which is 3.5 million acres of surface and 3.6 million acres of subsurface land, to see what is out there and how are the people using it and what’s the demand,” Foster said.

Foster said the office is on track to release its revision as early as March.

Red Desert lovers of all descriptions have been watching the process carefully.

The current RMP already makes a lot of Red Desert lands available for oil and gas development, said John Rader, an attorney and WOC conservation advocate. “A ton of it has been leased,” he said.

Total oil and gas lease acreage within the Rock Springs field office portion of the Red Desert is 224,062 acres, according to the office.

Among what hasn’t been leased, Rader said, are areas designated as Wilderness Study Areas — which ensure protections from development — as well as areas of critical environmental concern that are under administrative protections.

It’s the second category that conservationists are worried about.

“We’re concerned that those (administrative protections) are completly taken away in this draft.”

A big part of that concern stems from President Trump’s “energy dominance” agenda, which emphasizes the expansion of oil, coal and natural gas development across America’s public lands. The agenda has been reflected in recent RMP revisions around the country, Rader said.

“Almost every other western state has had a recent RMP revision and they wiped out all of the protections,” Rader said.

The next tourist destination?

Kusiek doubts the Red Desert’s wonders will ever elevate its profile to the level of world-famous Wyoming destinations like Yellowstone National Park and Devils Tower National Monument.

Because of clay soils that turn into tire-gumming muck, Kusiek said, the season for recreating is short. And Kessler noted that the landscape is simply not for everyone. It’s rugged, sparse and easy to get lost in.

The Oregon Buttes are located in a federally designated Wilderness Study Area in the Red Desert. (Ecoflight)

With pressure on public lands increasing across the West, Kusiek said striking a balance between loved and overloved has been “paramount.” After all, its very lack of services could mean the Red Desert is not equipped to handle hordes of visitors.

“There will probably be some increase in traffic,” Kusiek said. At the same time, he said, WOC doesn’t expect that increase to strain the landscape, “and we certainly don’t want people to overpopulate it.”

In fact, he stressed, WOC isn’t advocating for any changes in the Red Desert. “We don’t want to change anything out here,” he said. “That’s not what this is about.”

Kessler said WOC hopes to have the maps printed by the end of March; the nonprofit is still determining its distribution plan.

Ferguson at the Farson Merc said that she for one is interested in carrying them. “We definitely would like to have them,” she said. Right now, the store offers general maps. “That’s not helpful when [people] are looking for sights,” she said. “So I think these maps are really really good.”

Foster said the BLM wants people to be out enjoying their public lands. “Certainly any tools that help people get familiar with our landscape out there is a good tool for us,” she said.

This story has been updated with the current total acreage of oil and gas-leased lands in the RSFO portion of the Red Desert. -ED