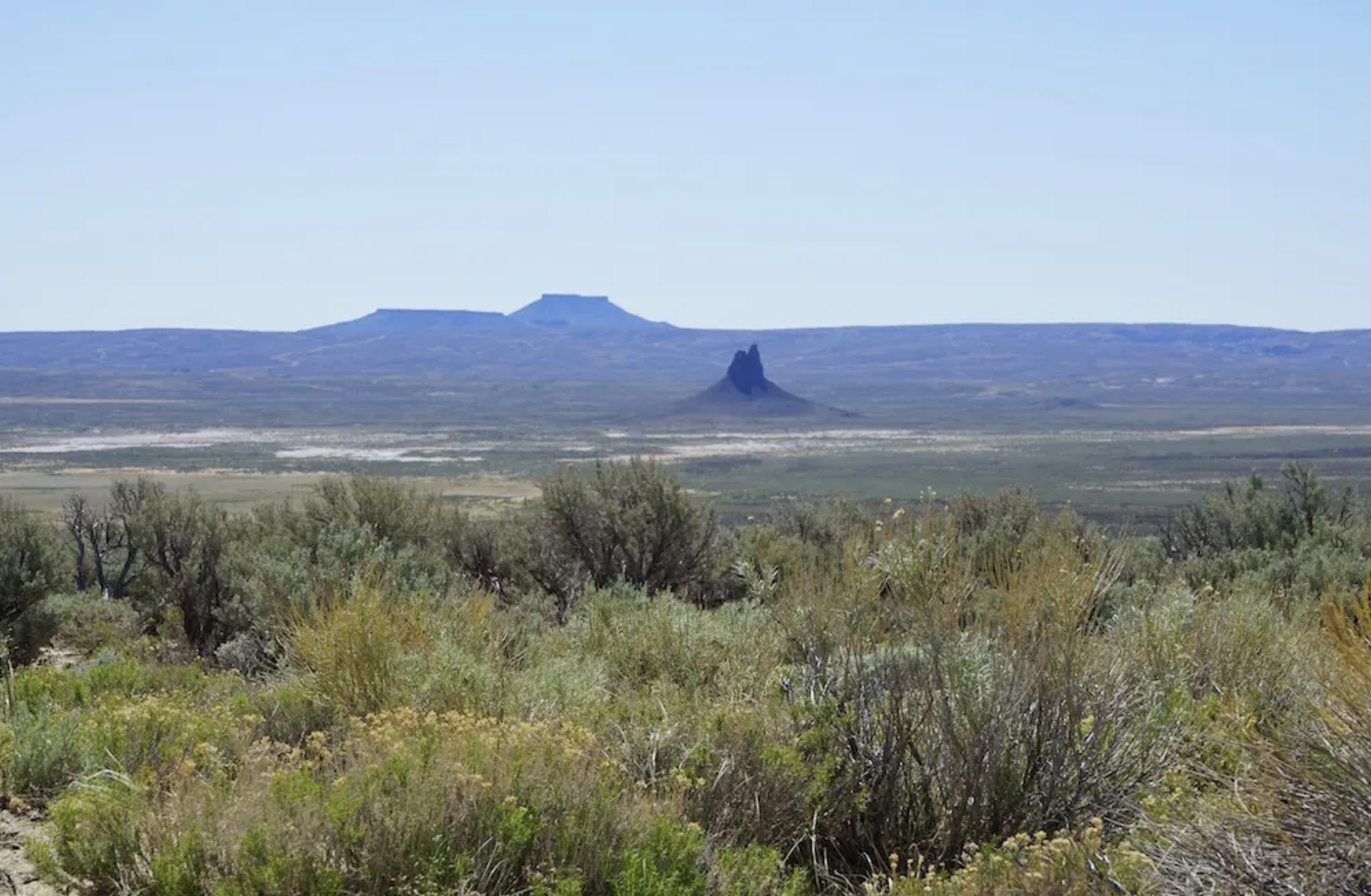 Published in the WyoFile by Katie Klingsporn

The Boar’s Tusk rises from the Red Desert. The Red Desert is known as “Red Dirt Country” in the Shoshone language, according to Eastern Shoshone member Jason Baldes. (Katie Klingsporn/WyoFile)

RED DESERT – Sitting in the verdant shade of an aspen grove on Steamboat Mountain — which rises out of the Red Desert in southern Wyoming — Jason Baldes talks about buffalo.

As the buffalo reintroduction coordinator for the Eastern Shoshone Tribe, this is not unusual for Baldes, who’s wearing a shirt that reads “Make Buffalo Great Again.” But on this day in early June, he isn’t focused solely on the herd he helped reintroduce to the Wind River Indian Reservation.

Instead, he imagines the hulking creatures that once roamed this mountain being pushed by members of his tribe up the funnel-shaped valley toward an ancestral buffalo jump near its peak.

“They would put pressure on them to move right up this draw, right to where we’re sitting right now,” Baldes says. The animals would be channeled to a natural crevice formed by the rock, he says, where they would plunge over the edge and be easily harvested.

And those buffalo? Shoshone people used them from horn to hoof, he says — hides for tepees, organs for water bags, bones for tools, meat for sustenance. Baldes, who grew up riding horses, camping and rock hunting in the Red Desert with his father, calls the site “life’s commissary.”

Baldes’ tale paints one scene in a tableau of stories about Indigenous uses of the Red Desert, which is the ancestral land of tribes including Shoshone, Ute, Goshute, Paiute, Bannock, Arapaho, Cheyenne, Lakota and Crow, according to Citizens of the Red Desert, a coalition dedicated to protecting the Red Desert from large-scale industrial activities. In this vast and varied landscape, petroglyphs, ancient trading routes and other cultural sites offer evidence of tens of thousands of years of use and habitation.

The Red Desert, Baldes says, was part of the Fort Bridger Treaty of 1863, which established a 44-million-acre reservation for the Shoshone people. The reservation was drastically reduced by subsequent treaty revisions and other means and no longer includes the Red Desert, but the significance of the area was in no way diminished.

Baldes believes the recognition shared by many Indigenous cultures of nature’s interconnectedness can benefit anyone who cares about the Red Desert, he says.

“I think that that has a lot of potential in helping people see and understand our relationship with places like this,” he says.

A beautiful and bizarre landscape

The Red Desert yawns across much of southwestern Wyoming and beyond — from South Pass City it spills south, east and west, past the Utah and Colorado borders.

Wildly diverse features occupy the landscape, where otherworldly badlands, isolated mountains, unexpected buttes and shifting snow-white sand dunes erupt from sagebrush seas. The longest ungulate migration in the continental U.S. crosses through, and it is home to a collection of wilderness study areas.

It’s austere, beautiful and odd. It is also peppered with oil and gas leases, and it has long been the focus of conservation efforts.

Those efforts have ramped up in recent years in anticipation of long-awaited revisions to the BLM’s Resource Management Plan for the area. Conservationists, concerned that the new RMP could open up more of the Red Desert to energy leasing, are doubling down on efforts to educate the public about its outdoor-recreation, cultural and historical resources.

Citizens of the Red Desert, which aims to secure federal protections for the landscape, is in the early stages of working toward a congressional bill, according to coordinator Shaleas Harrison. It is engaging a host of stakeholders from the petroleum industry to ranchers, she says, and several of its team members, like Baldes, are tribal citizens.

“I want to build up a platform for tribal nations to speak about their ancestral and contemporary lands,” Harrison says.

“I think it’s just now that conservation organizations are finding out how to work with tribal communities though,” he added.

As the daughter of well-known Northern Arapaho citizen Mark Soldier Wolf, Yufna Soldier Wolf grew up tagging along with her dad on trips to the Red Desert, where anthropologists and archeologists regularly sought his knowledge, she said.

“He was always here,” she says, sitting on the flank of a dune in the Killpecker Sand Dunes, an enormous complex of sand and scrub. “He was always going somewhere on the land and I was always with him.” The fine sand winks under a full sun; today the wind has sculpted it into scallops and ridges. A small band of elk skirts a distant drift at a trot.

“He was always like, ‘this is a real special place. Don’t forget it,’” said Soldier Wolf, who is the Wyoming Outdoor Council’s Wind River Coordinator and a Citizens for the Red Desert team member.

The Northern Arapaho tribe hasn’t occupied the Red Desert as long as the Eastern Shoshone, Soldier Wolf says; her tribe was largely migratory, moving into the area later. But it’s still special for tribal citizens — wilderness is akin to church for many, she says.

Soldier Wolf grew up knowing the dormant volcanic feature that rises prominently from the desert, which maps and guides call The Boar’s Tusk, by its Northern Arapaho name The Parents due to its resemblance of two human figures.

Soldier Wolf hopes to disseminate Native stories in ways that make them as easily accessible as those from the settler cultures that erected the signs, named the landmarks in books and maps and defined ownership in Western terms, she says.

“We can’t just let it go away, and not ever tell those stories anymore,” she said. “That’s my objective.”

She wants to ensure the stories are passed on to Native American youth. Like her own daughter Blue Moccasins, 14, who has accompanied her mother to the Red Desert today — just as Yufna once did with her father.

Soldier Wolf’s job, she says, includes coordinating all the tribes whose ancestral lands are part of the Red Desert to determine what they want for the place, whether that’s certain protections or more acknowledgement of traditional narratives.

“Being able to tell stories from long ago, and connect it back to the land, that’s what a lot of tribes are doing now,” she says. “So I’m hoping that’s what comes out of that.”