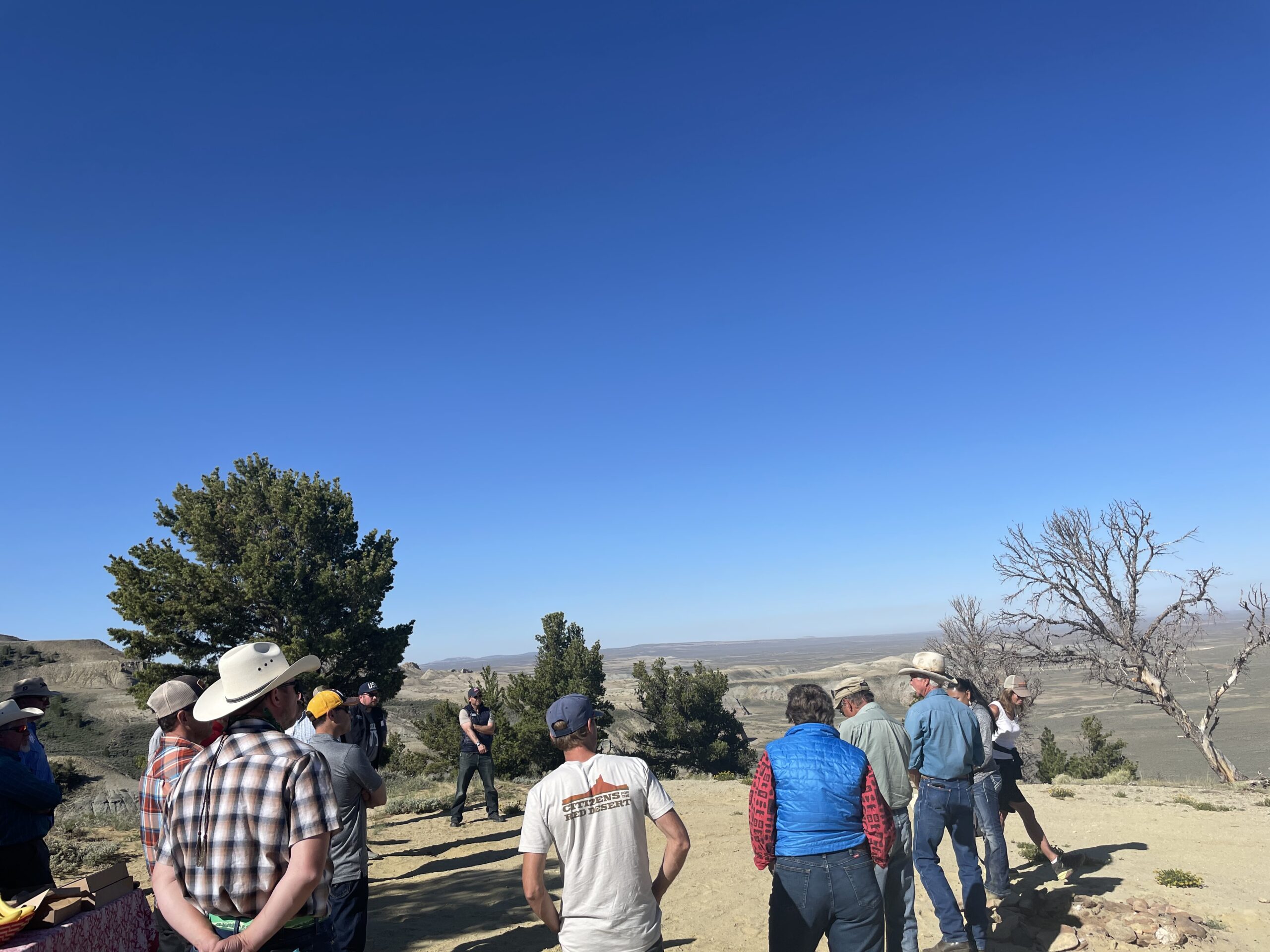 Citizens for the Red Desert (CfRD) hosted a series of tours for community leaders, state officials, tribal members, and elected leaders this Spring and Summer.  The purpose of these tours is to gather input from members of the public to develop the core values that Wyoming people share for the Red Desert.  As CfRD work toward permanent protections in a congressional bill, we hope these values are translated into management language which secures the many values and magic of this place for future generations. One noteworthy tour occurred this past June with twenty state officials.

State Officials Tour, June 14, 2021-On a cool morning in the middle of June, a circle of representatives from Wyoming, the Wyoming Business Council, Office of Tourism, and WYDOT gathered on top of Whitehorse Creek WSA (Wilderness Study Area), overlooking a wide swath of cherished desert called the Golden Triangle, sweeping north into the snow-capped peaks of the Wind River mountains. The circle was quiet as Yufna Soldier Wolf, a leader and activist from the Northern Arapaho Tribe, burned sage in a small pan and began to pray, initiating the day with a traditional ceremony to acknowledge and respect the landscape. She knelt to the ground, scooping the sage smoke and wafting it all around her, then inviting others to participate. This welcome to the wild Red Desert set a tone of appreciation for the day.

The group was composed of representatives from Game and Fish, WYDOT, and Wyoming State Parks, as well as resource experts such as Yufna Soldier Wolf, John Mionczynski and Todd Guenther, who spent the day with Citizens for the Red Desert and the Wyoming Outdoor Council to experience this incredible landscape and discuss the values that make it so special.

After a round of introductions and coffee and pastries, Todd Guenther led a charismatic presentation about the pioneer history under our feet, and how South Pass influenced the modern world. With waving arms and a big smile, he entertained the saga of a half million emigrants forging west in a dust cloud of wagon trains. In 1835, Narcissa Whitman and Eliza Spalding became the first two women to cross South Pass and complete the passage to the Pacific, inspiring thousands of families to believe they could do the same. “Those two women changed the world,” Todd emphasized. After that, South Pass became a confluence for westward travel, including the Oregon, Mormon, and California trails. This migration corridor inevitably led to colonizing the west, which in turn galvanized the United States as a continental nation.

Yufna, a Northern Arapaho citizen, added a native perspective to the history of this landscape, explaining that tribes have thrived in the Red Desert region for over twelve-thousand years, and that Indigenous knowledge and traditions have always been intertwined with the ecosystem. The Red Desert is an important cultural landscape to many tribes, including the Northern Arapaho, Eastern Shoshone, Ute, Lakota and Cheyenne, who used this migration corridor to follow game and other resources between the seasons.

In 1863, the Fort Bridger Treaty secured 44 million acres of land for the Eastern Shoshone, which included the Red Desert expanse. Five short years later the treaty was amended by the U.S. government, shrinking the reservation by 90 percent and eliminating the Red Desert from its bounds. The landscape remains sacred to local tribes, where petroglyphs, ancient dwellings and ceremony sites endure.

The Golden Triangle, stretches into the distance north of Hwy 28 and bordering the foothills of the Wind River range, is a critical habitat zone for an abundance of wildlife including sage-grouse, elk herds, mule deer, pronghorn, foxes, eagles and many others. Ian Tator, who is the State Terrestrial Habitat Manager for the Game and Fish Department spoke on behalf of the glowing ecosystem of the Golden Triangle, explaining that the western slope of the Wind Rivers is one of the highest concentrations of wildlife and biodiversity in the entire state. He touched on the ecological importance of the mule deer migration corridor that spans from Hoback to the Red Desert, as well as the critical habitat provided for Greater sage-grouse restoration.

The group piled into a large 15-passenger van and headed south, past the Oregon Buttes and Continental peak into the Great Divide basin. John Mionczynski led a hike into the iconic badlands of the Honeycomb Buttes WSA, sharing waves of stories from decades of Red Desert exploration, ethnobotany, and prospecting. John took the group into a unique canyon of colorful stone that undulates into a narrow passage that leads to the summit ridge, where the group marveled at an endless vista into the heart of Wyoming’s badlands. John recounted the origin of WSAs throughout the Red Desert region in the 1970’s. There are currently nine WSAs in the area, ranging from badlands to sand dunes, all of which contain unique characteristics that qualify them to be considered for Wilderness under the Wilderness Preservation System. As such, WSAs are managed for their Wilderness characteristics in order to preserve their potential consideration for Wilderness.  However, this protection is temporary and can be withdrawn and/or revised with federal legislation.

The tour settled into a shady aspen grove at Chicken Springs for lunch surrounded by hundreds of wild irises in bloom. During lunch the group chatted about the changing demands that are facing Wyoming public lands. Representatives from Wyoming State Parks spoke to the drastic uptick in outdoor recreation that has surged across the state, and emphasized the importance of these growing industries, as well as the necessary management to preserve the integrity of these wild places.

By late afternoon the van was descending from Steamboat Mountain into the vast Killpecker Sand Dunes WSA, which are some of the largest aeolian dunes in the world. The hills of sand spread a hundred miles wide, rolling into an iconic pillar of stone called the Boar’s Tusk. We walked into the pristine desert ecosystem to conclude the day. During this final conversation was a theme that everyone agreed upon; the Red Desert is a special place that embodies the wild heart of west and Wyoming.