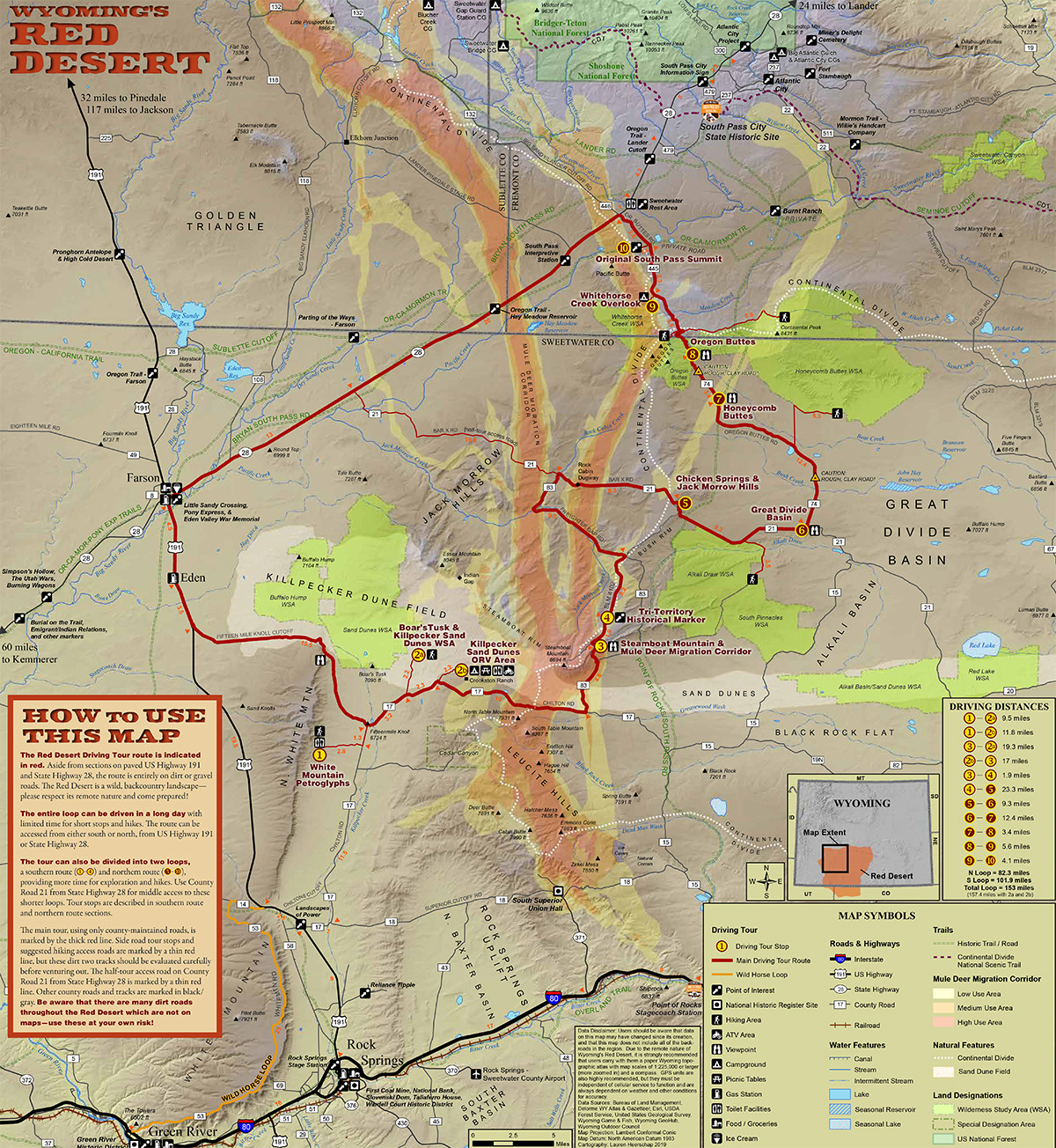 Published in the Cowboy State Daily by Bill Sniffin

RED DESERT — Jim Smail’s Scottish grandfather came to America and homesteaded in Farson back in 1915.

That old desert rat started taking Jim’s father to the Red Desert back then and that tradition continued as Jim’s father took his son to the desert shortly after Jim entered the world 83 years ago.

This column is a tribute both to my friend Jim, who died recently, and to that vast desert that he loved more than just about anybody that I ever knew.

It is also a companion story to the unveiling of a wonderful new map of the Red Desert produced by the Wyoming Outdoor Council, which printed 20,000 copies for distribution across the state.

A map such as this is long overdue.

Has this magnificent area known as the Great Red Desert changed in the more than three-fourths of a century that Jim roamed it?

Well, yes and no.

Just like today’s energy prospectors who look to Wyoming’s plains for sources of power, the desert was always seen as a place of opportunity. In typical risk-reward activities, the stakes were high when you ventured out into this vast empty place.

Some folks think of it as a place almost devoid of permanent human habitation. But it has been provided a stage for American Indians, Oregon Trail travelers, gold prospectors, the Pony Express and other intrepid souls trying to conquer an unconquerable place.

Geographically, some folks think the desert is a gigantic space that includes land crossed by Interstate 80 and extends up toward Casper, Shoshoni, Riverton, Lander and encompassing Rock Springs and Green River.

But to the purist, and I guess that includes me, the real Red Desert is found in the confines of the Great Divide Basin. This, truly, is the loneliest place in the loneliest state. A place with no permanent human habitation at the present time. Despite that, it is a place that has been occupied by humans for over 1,000 years.

In many ways the desert has not changed at all.

Smail told me: “Among the high points of my life has been driving my jeep around the approved roads in the desert and visiting ancient sites of these early humans. We always approach them with respect and with a vivid imagination to trying to figure out what was happening here?

“Perhaps this desert affection started with some family history. My dad climbed up Boar’s Tusk north of Rock Springs and sat me in the notch high above the desert floor when I was just 18 months old. Now that would whet anyone’s appetite!” Smail recalled.

To someone speeding by the desert on the highways, well, how can you describe to them the joys of White Horse Canyon? Or the vast Killpecker Sand Dunes? The magic of Steamboat Mountain and its wondrous buffalo jump? Adobe Town or the Honeycomb Buttes? Continental Peak and the famous Oregon Buttes? And so much more.

It is a vast area and once you start looking, well, it is almost impossible to comprehend it all.

Here’s a challenge: Turn on the Google Earth app on your computer, tablet or your smart phone and scan the Red Desert between Rock Springs and Lander. What you see will look like the surface of some far-away planet. Yet, it is right here in Wyoming.

Let me take you on a little journey that we took a few summers ago. Here are some of our thoughts and feelings.

Strange noises and odd winds abound in the desert. Was that sound just the wind or was it the noise generated by the ghosts of a vast herd of bison that roamed this place for thousands of years? Or was that the cry of a lonely Indian brave in the center of a vision circle evoking whatever image he was trying to conjure?

Maybe it was the plaintive cry of the gold miner lost in a snowstorm, knowing full well that his death was imminent? Maybe it was the sound of a lonely white man trying desperately to work his way across this vast expanse?

Perhaps it was a combination of all of these?

We were standing on a lonely knob about 25 miles southwest of Jeffrey City.

Strange rocks covered this knob and occasionally, powerful gusts of wind would come from nowhere and almost knock you down. My three companions and I all looked at each other following these gusts. “What the heck was that? Did you feel that?”

Jim and I were driving around to some of these odd sites. It was my first time out here to most of them. The first time experiencing the odd feelings and powers that the desert emits.

But we were not there to check out the wind. Unusual ancient rock structures and symbols were our goals, commonly called “teepee rings.”

I prefer the term “vision circles” and they can be found in old sites along old, worn Indian trails.

Smail’s theory was that young Indian braves or perhaps older Indian medicine men used these circles as ways to experience visions or to communicate with the spirit world.

Instead of perfectly round circles, often the rings of rocks would have an opening and most often, they actually had a spiral effect, as if “to let the spirits into the circle,” he speculated.

Although Smail did not qualify as a learned college professor, he spent much of his 80-plus years in this desert, having originally grown up in Farson and spending the rest of his life in the Lander area.

We continued on riding along the well-worn trail to a location rarely visited near the Honeycomb Buttes. There, we found 19 of these vision circles, which were the best I had ever seen.

We were in the northern part of the Great Divide Basin, a vast 2.25 million-acre area where the Continental Divide splits in two. Water inside that basin does not go outside of it, not East or West.

My favorite area in the Red Desert is the Oregon Buttes area, which is full of wondrous rock formations and strange canyons.

Aging hippie-types like to believe that certain places in the world have special energy fields called vortexes. Not sure I believe it, but there are places in the Red Desert that sure give me a positive energy boost.

Smail contended that if Wyoming had a vortex area, it might very well be right there.

Then another of our companions, Joe Motherway, told us about these weird circles he and his wife Bonnie had found. We headed off to the east through this maze of old dirt roads and two-tracks. Occasionally there were roads blocked by signs listing that area as part of a wilderness study area. We are not allowed to drive off the road with jeep or an ATV.

This new spot was hard to find and after a miss or two, we finally arrived. And then the aforementioned wind really started to blow. Eerily so.

The place was littered with what Joe called “Flying Saucer Rocks,” which appeared to have been burned and had other little rocks stuck to them. The site was a small barren knob surrounded by dozens of square miles of sagebrush.

It was obviously a special place. And it was full of these vision circles — only these really featured that spiral effect. Doubt anyone would call them teepee rings because of the odd shapes.

Of course, we did not disturb them. Just took some pictures and tried to keep from getting blown over by the wind.

Then it was time to go home. We traveled a few miles before stopping. “Do you notice anything different?” Jim Smail asked me. “No wind.”

Check out additional columns at www.billsniffin.com. He has published six books. His coffee table book series has sold 34,000 copies.